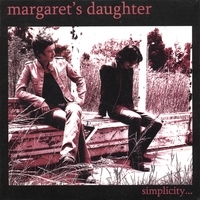 Margaret’s Daughter often performs as a duo, focusing on the interaction between their two guitars and vocal harmonies. Fans saw them playing these stripped-down versions of their songs, and wanted to take some of this home with them. Margaret’s Daughter delivered with Simplicity... As the title suggests, it is a simple, acoustic album, with some percussion and violin added here and there to spice things up.

This entire album was recorded over four days at Etienne's house. Nothing fancy, the aim was to capture the simplicity of their unplugged show, without adding anything that couldn't be reproduced live. They don't do many cover versions, but their version of Heather Nova's "Like Lovers Do" has always been an audience favourite, so it's included here.

Save this product for later
Display prices in: ZAR